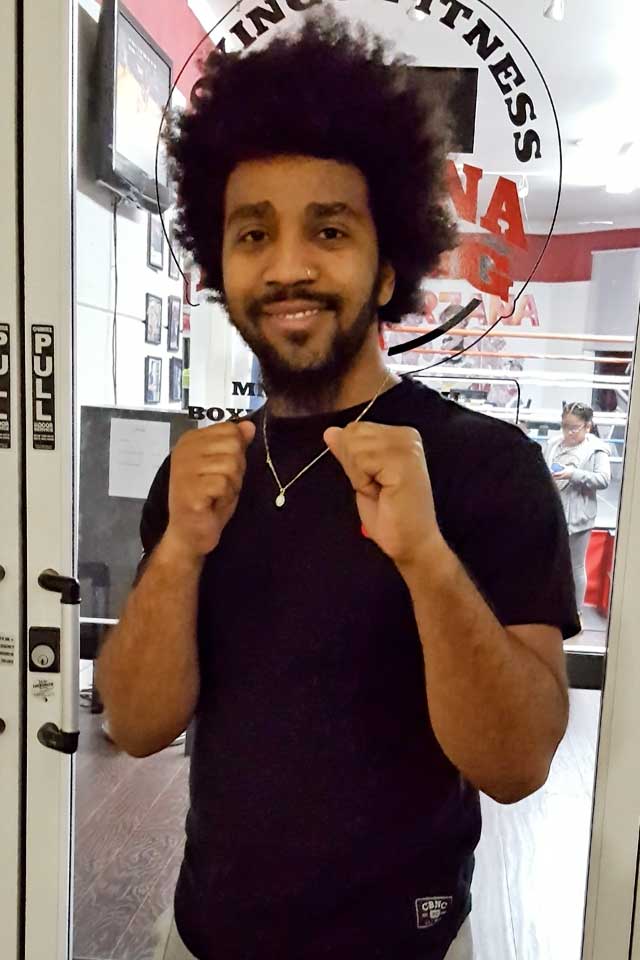 Brandon Newberry has been boxing since age 6. As a youth, he explored other sports such as football and basketball, but he was unsatisfied with team sports. With his mother’s encouragement, Brandon decided to follow in his father’s footsteps and pursue boxing instead. At Tarzana Boxing, Brandon came to meet a LA icon and pro boxer and trainer Charles “Buddy” Bereal, who quickly became both a mentor and another father figure. Under Bereal’s tutelage, Brandon developed the patience, mental discipline and self control that came with his training.Brandon is an amateur boxer, a 2x Golden Gloves Champ and has won 56 fights over the last 20 years.

Melissa C
I have been going to Tarzana Boxing for about 3 months and LOVE IT! It is so much fun and I never leave without being drenched in sweat. This has been the only workout I have been able to stick to faithfully for some time now. I feel my body changing and have more energy throughout the day.The instructors are AWESOME and so are the owners. They are a super nice couple that are always helpful. I recommend taking Thor’s kickboxing class if you want a real workout! They are open 7 days a week and have classes that fit any schedule.
Melissa B
This is not just another hobby for me, this has changed my life. I love the kickboxing classes and soon I will be doing the Boxing classes. Each class is amazing and gives me an incredible workout. I’m on my way to lose 25 pounds and so far have lost 9 pounds.The instructors are amazing.I have to admit Thor is my favorite instructor, plus he’s pretty cute. Actually all the instructors are attractive,which always makes me work a bit harder.I look forward to hitting my goal
John E
Being involved in boxing for over 30 years, I can soundly say, Tarzana Boxing is by far the best workout facility in the Valley. Not only do they have the best group of trainers and instructors I’ve ever seen in one place. But you also get a great family atmosphere that every member enjoys being a part of. I highly recommend Tarzana Boxing to anyone willing to learn. You will  have a great time while getting in shape.
Anita T
Wonderful teachers! Fantastic staff! The owners rock! Great workout! Love this place! ?
prevnext